Rajasthan is arranged in the north-western part of India, alluded to as the Desert Jewel of India. A dynamic, outlandish state where custom and regal wonder meet in a mob of colours against the tremendous background of sand and desert. The enchantment of Rajasthan is unrivalled on the planet for its legacy, culture, safaris, sand dunes, and rich green woods with its natural life.

Rajasthan has a remarkable variety in its whole structures - people, traditions, culture, ensembles, music, habits, dialects, cuisine, and geology. Experience all of it with

. This Royal Rajasthan tour is committed to exhibiting significant wonders and different attractions in Rajasthan. You would likewise visit different cities around Rajasthan, including Delhi, Agra, Jaipur and others. A 16 Days and 15 Nights tour that slobbers your spirit and with our unparalleled services and focused costs for the best of tour understanding.
Book This Tour
1

You are relied upon to arrive at Delhi before dinnertime. You would be picked by our agents and would be accompanied to your hotel. The rest of the night is all yours. You can either do some little touring around the hotel or rest.

After breakfast, you would visit different destinations in Delhi, including Swaminarayan Akshardham Temple, Jama Masjid, India Gate, Humayun's Tomb, Qutub Minar, Gandhi Memorial, and others. You would eat at any hotel and proceed with your touring. At night, you would appreciate a move appear and return to the hotel by late at night.

After breakfast, you would begin towards Agra on the road. It would take four hours to arrive at Agra. When you arrive at Agra, you would look into a hotel for check-in and start touring right away. You would visit the Taj Mahal, Agra Fort, Itmad-Ud-Daula tomb and others. You would arrive in your room late at night.

While on Jeep Safari, you will get an intriguing chance to investigate and savour the picturesque excellence of Ranthambore as you will be driven along the Ranthambore trail. Considered as one of the greatest national parks in northern India in 1980 will offer you to observe, close with numerous natural life resemble peacocks, bears, gazelles, sloths, wild hogs and no uncertainty Bengal tigers, appreciate the excellent striking assortment of fowls and creature rushing/unwinding in their district.

After breakfast, you would begin your 3-and-a-half-hour journey towards Jaipur. Upon reaching, you would appreciate Jama Masjid, Buland Darwaza, Jodha Bai Palace and others. You would reach Jaipur by late at night. After coming to Jaipur, you would be checked into a hotel, and you can rest for the night there.

After the delicious breakfast, you would visit Amber Fort, where you would have an elephant ride around the fort. Toward the evening, you would visit Jantar Mantar, City Palace, Bazaar, Nawab Sahab ki Haveli and others. You would arrive at your hotel late at night.

After breakfast, drive to Udaipur for a 7-and-a-half ride. Upon reaching Udaipur, check-in to the hotel and rest.

Udaipur, the "City of Lakes," is one among the most sentimental and most excellent cities of India. It is a dazzling area around the blue water lakes, the edge of the rich slopes of the Aravalis. A dream in white absorbed sentiment and magnificence, Udaipur city of Rajasthan state is an intriguing mix of sights, sounds and encounters - a motivation for the creative mind of the painters, artists and scholars. Udaipur's lakes, gardens, temples and narrow paths dissipated with slows down, convey the kind of courageous past, encapsulating valour and gallantry.

Toward the beginning of the day, take a boat ride at Lake Pichola. Following this, visit City Palace - It was built by the Maharana Udai Singh as the capital of the Sisodia Rajput group in 1559. Jagdish Temple is a huge Hindu temple in Udaipur in Rajasthan. A major tourist fascination, the temple was initially called the temple of Jagannath Rai; however, it is presently called Jagdish-Ji, Saheliyon ki Bari (Gardens of the housekeepers of Honour) and Museum. At night, move to the hotel for an overnight stay.

After breakfast, drive to Jodhpur for 5 hours. Upon reaching Jodhpur, check in to the hotel. In the evening, you can visit local markets if you are a shopaholic. Take rest in the night.

Jodhpur is known as the "Sun City" for the splendid, bright climate it appreciates round the year. It is additionally alluded to as the "Blue City" because of the splendid blue-painted houses around the Mehrangarh Fort. The old city circles and the fort is limited by a divider with a few doors while the city has extended, especially outside the divider in recent decades.

After breakfast, visit the Mehrangarh Fort - Mehrangarh Fort, situated in Jodhpur, Rajasthan, which is perhaps the biggest fort in India. The fort is arranged 400 feet over the city and is encased by forcing thick dividers. Following this, visit The Jaswant Thada, which is an architectural milestone situated in Jodhpur. It is a white marble dedication worked by Sardar Singh in 1899 in memory of Maharaja Jaswant Singh II. After this, visit the Umaid Bhawan Palace, which is one of the world's biggest private living arrangements. A piece of the royal residence is overseen by Taj Hotels. Named after Maharaja Umaid Singh, grandfather of the present proprietors of the royal residence, this landmark has 347 rooms and fills in as the primary home of the past Jodhpur imperial family.

In the end, appreciate a guided Jeep Safari to an eco-amicable faction of the Hindu religion, it is one of the diverse networks of Jodhpur. Post Jeep Safari, return to the hotel for an overnight stay.

Have breakfast and leave for Jaisalmer on a 7-and-a-half ride. Upon reaching, check-in to the hotel and take some rest. In the evening, you can explore the local markets there. Come back to the hotel for an overnight stay.

Jaisalmer was established by Prince Jaisal Bhatti. The town remains on the edge of yellowish sandstone, delegated by a fort, which contains the castle and a few luxurious Jain temples. Hundreds of years before Jaisalmer's main situation on the camel train courses brought its local people tremendous riches, which they spent in structure unpredictably carved royal residences and temples in golden-yellow sandstone.

After breakfast, go for a full-day tour of Jaisalmer. Visit the Jaisalmer Fort - Jaisalmer Fort is probably the biggest fort on the planet. It is arranged in Jaisalmer city in the Indian province of Rajasthan. It was worked in 1156 AD by the Bhati Rajput ruler Rao Jaisal, from where it infers its name, Manak Chowk, Havelis. After this, visit Gadisar Lake, which is one of the most significant tourist attractions in Jaisalmer, Rajasthan, its appeal lies in the way that it was the main wellspring of water for the Jaisalmer city in the days of yore, and the beautiful markets.

Toward the evening, go for an outing to Sam Sand Dunes. At night take a camel safari and appreciate the nightfall at sand dunes. Later drive back to the hotel for an overnights stay.

Have breakfast and leave for Bikaner on a 4-and-a-half-hour ride. Upon reaching, check in to the hotel and get ready to visit Junagarh Fort, which comprises of courtyards, stands and balconies. Next, visit the camel reproducing farm, one of a kind ranch in Asia. What's more, last yet not the least, do buy Bikaner bites and desserts, which are well known everywhere throughout the nation. Come back to your hotel and take rest in the night.

After breakfast, get ready for your journey towards Mandawa town, known for its "open workmanship Gallery" of Rajasthan. Mandawa is a live instance of Fresco's expressions. Well-known havelis where one can observe fresco is Sewaram Saraf Haveli, Ram Pratap Nemani Haveli, Hanuman Prasad Goenka Haveli, and many more. Post Haveli tour, come back to the hotel for an overnight stay.

On the last leg of your journey, drive towards Delhi on a long ride of 14 hours. Check-in to the hotel and rest till the next morning.

Day 16: Goodbye to the Lovely Tour

Have a delicious breakfast, and our travel executive will drop at the desired place in Delhi/NCR for your further journey ahead. This will be the end of your Royal Rajasthan Tour.

We also available on 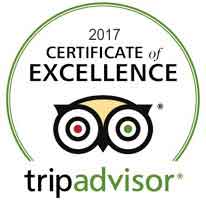 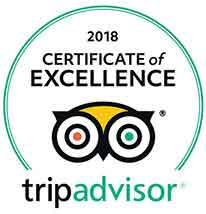 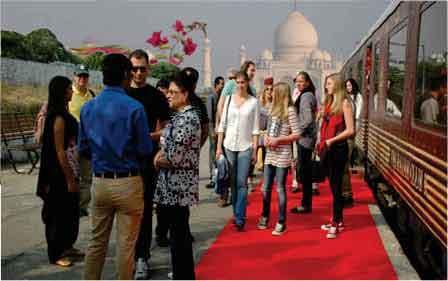 Agra the land of wonders and pure love in India. Many visitors come from different corners of the world to India and none of them have skipped Agra on the tour. Not only have that, but also the tourist from the different parts of India always rushed to this river bank city to enjoy the arts and beauty of the monuments. 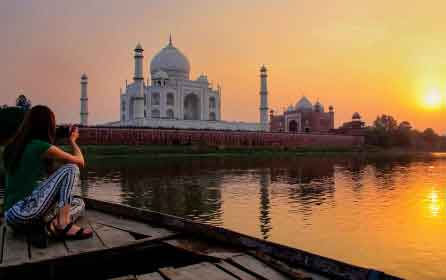 Enjoy the Mughal Architecture on Overnight Agra tour Taj Mahal also popularly known as the symbol of love made of white marble was built by Emperor Shah Jahan on the bank of river Yamuna in Agra, India. It was made as a memorial for Mumtaj Mahal, Shah Jahan's wife and was named after her name to honor her. 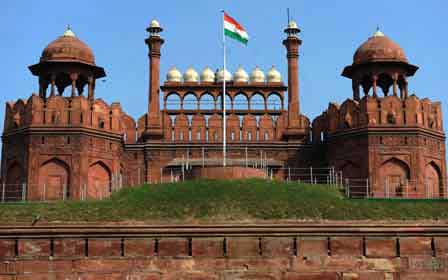 Delhi is the heart throb of India. Since centuries it has the political city for rulers who came to India from diverse parts of the world. Today it has completely transformed into a metro city and is an amazing blend of modernity but at the same time it has not lost the touch of its glorious past. The Delhi Same Day Tour starts at 9 AM.

The most wanting travel place in the world holding various culture, religion, languages and different people is none other than INDIA.